Commentary: The selling or leasing of land to foreign investors may make sense for the development of a country, but it must not deprive people of their rights

Since 2012 the United Nations has adopted voluntary guidelines for land and forest management to combat land grabbing. But only a few people know about the guidelines, which aim to protect small farmers particularly in Third World countries.

When multinational investors buy up fields for their huge plantations, the residents lose their livelihood and means of support and will soon only be sleeping in their villages. If they are lucky, they might find work with relatives in another village. Many also try their luck in the city, but poverty and unemployment are high. What remains are depopulated villages and the huge palm oil plantations that have devoured farmland. People can no longer go there to hunt and grow plants or get firewood. The land no longer belongs to them!

Land grabbing is the process whereby mostly foreign investors deprive local farmers or fishermen of their fields, lakes and rivers. Although it has been widely used throughout history, land grabbing – as used in the 21st century – mainly refers to large-scale land acquisitions following the global food price crisis of 2007-2008.

From 2000 until 2019 one hundred million hectares of land have been sold or leased to foreign investors and the list of the most affected countries can be found here below: 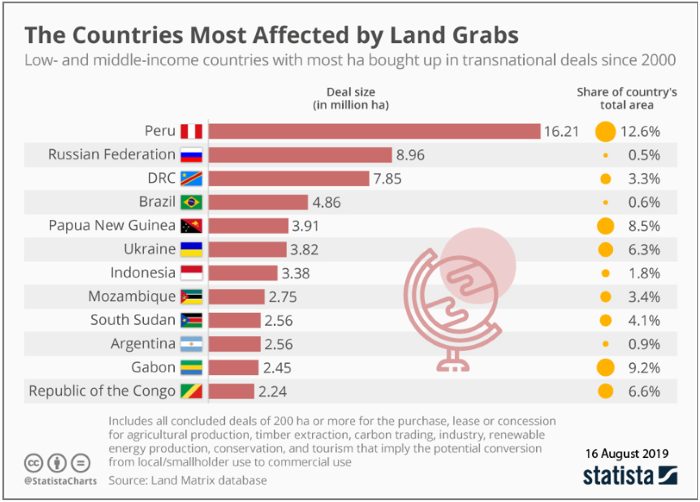 Such investment may also make sense for the development of a country, but it must not deprive people of their rights: local people are starving while food is being produced and turned into biofuels for export right before their eyes.

In 2012, after three years of discussion, the UN created an instrument to prevent such land grabbing: the VGGTs (Voluntary Guidelines on the Responsible Governance of Tenure of Land, Fisheries and Forests in the Context of National Food Security:

Detailed minimum standards for investment are established, e.g. the participation of affected people or how to safeguard the rights of indigenous peoples and prevent corruption. Formally, the document provides a significant contribution to all people fighting for their rights.

The document, however, is quite cryptic. The guidelines should be simplified and explained. Only in this way can activists, but also farmers and fishermen, become aware of their rights.

Others doubt that much can be achieved through these guidelines because they are voluntary. After all, the UN has little or no say in the matter and can do no more than that. If governments implemented them, they would apply them as they will.

In Bolivia, for example, there are already laws that are supposed to prevent land grabbing. In the Amazon, however, Brazilian and Argentinian companies are buying up forests to grow soya and sugar cane, often with the approval and agreement of corrupt government officials. Further guidelines would probably be of little use.

At most, activists already use the guidelines to lobby their governments. Together with other environmental and human rights activists, they set up networks: through local radio stations and village meetings, they inform people of the fact that they right to their land.

Nevertheless, in many countries in Africa and elsewhere, there is a lack of documentation proving land ownership. Originally, tribal leaders vocally distributed rights of use. But today’s leaders are manipulated to pressure villagers to sell their land.

The biggest investors are Indians and Europeans: they are buying up the land to grow sugar cane and palm oil plantations. This phenomenon has been going on since 2008: at that time – as noted above – the world food crisis drove up food prices and foreign investors, but also governments, started to invest in food and biofuels.

Investment in land, which has been regarded as safe since the well-known financial crisis, must also be taken into account. Recently Chinese companies have also been buying up thousands of hectares of land.

In some parts of Africa, only about 6% of land is cultivated for food purposes, while on the remaining areas there are palm oil plantations. Once the plantations grow two or three meters high, they have a devastating effect on monocultures that rely on biodiversity, because of the huge areas they occupy. There is also environmental pollution due to fertilizers: in a village, near a plantation run by a Luxembourg company, many people have suffered from diarrhea and some elderly villagers even died.

Consequently, the implementation of the VGGTs must be made binding as soon as possible. But with an organization like the United Nations, how could this happen?

It is not only the indigenous peoples or the local groups of small farmers that are being deprived of everything. The common land used is also being lost, as well as many ecosystems that are still intact: wetlands are being drained, forests cleared and savannas turned into agricultural deserts. New landowners fence off their areas and deny access to the original owners. In practice, this is the 21st century equivalent of the containment of monastery land in Europe that began in the Middle Ages.

The vast majority of contracts are concentrated in poorer countries with weak institutions and land rights, where many people are starving. There, investors compete with local farmers. The argument to which the advocates of land grabbing hold – i.e. that it is mainly uncultivated land that needs to be reclaimed – is refuted. On the contrary, investors prefer well-developed and cultivated areas that promise high returns. However, they do not improve the supply of local population.

Foreign agricultural enterprises prefer to develop the so-called flexible crops, i.e. plants such as the aforementioned oil palm, soya and sugar cane, which, depending on the market situation, can be sold as biofuel or food.

But there is more! If company X of State Y buys food/fuel producing areas, it is the company that sells to its State Y and not the host State Z that, instead, assigns its future profits derived from international State-to-State trade to the aforementioned multinational or state-owned company of State Y.

Furthermore, there is almost no evidence of land investment creating jobs, as most projects were export-oriented. The British aid organization Oxfam confirms that many land acquisitions took place in areas where food was being grown for the local population. Since local smallholders are generally weak and poorly educated, they can hardly defend themselves against the grabbing of the land they use. Government officials sell or lease it, often without even paying compensation.

Land grabbing is also present in ‘passive’ Europe. Russia, Ukraine, Romania, Lithuania and Bulgaria are affected, but also the territories of Eastern Germany. Funds and agricultural enterprises from “active” and democratic Europe, i.e. the West, and the Arab Gulf States are the main investors.

We might think that the governments of the affected countries would have the duty to protect their own people from such expropriations. Quite the reverse. They often support land grabbing. Obviously, corruption is often involved. In many countries, however, the agricultural sector has been criminally neglected in the past and multinationals are taking advantage of this under the pretext of remedying this situation.