Commentary: The world’s largest oil buyer has diversified its imports, and Africa now provides over a quarter of the total as a number of leading Chinese companies ramp up their investments in the region

In an attempt to position themselves as international players in the global oil and gas market, China’s national oil companies are investing heavily in the exploration and production of oil and gas supplies in Africa. Africa is the second largest region in supplying oil and gas to China, after the Middle East, with over 25% of its total imported oil and gas. 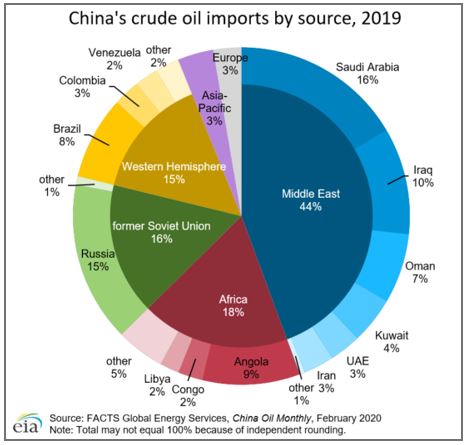 The joint investment is expected to be the fourth largest one in the 2019-2023 period, after BP Plc, Royal Dutch Shell Plc and ENI SpA. This investment in African oil and gas is larger than the 10 billion dollars that the People’s Republic of China is investing in South America and is more than double the estimated investment in North America. Coa Chai, an expert at GlobalData, said: “About two thirds of spending is in Nigeria, Angola, Uganda and Mozambique. SINOPEC and CNOOC are well-established in Nigeria and Angola, while CNPC has a stake in the Rovuma LNG project in Mozambique”. He also added: ” The increase in domestic energy demand has led China to diversify its imports of natural resources and China’s presence has increased significantly in almost 20 African countries”. One of China’s largest trading partners is the largest African oil producer, namely Nigeria. Nigeria currently pumps two million oil barrels a day and aims at producing three million barrels a day by the end of 2023. As China’s domestic oil production keeps on declining, experts predict that up to 80% of crude oil will be imported over the next 15 years.

There have been several remarkable investments by CNOOC, including the acquisition of a majority shareholding in an oil and gas exploration project by the Australian company FAR Ltd. The latter is drilling oil off the coast of Guinea-Bissau (West Africa). A FAR Ltd. spokesman said that CNOOC would obtain a 55.6% stake in the Sinapa and Esperança licenses of Swedish Svenska Petroleum Exploration AB. The Chinese oil producer may choose to become the operator of the joint venture after the completion of an upcoming offshore drilling campaign. CNOOC’s interest will be converted into a 50% share in case of successful discoveries. In Nigeria, CNOOC’s investment and involvement dates back to 2005 and the company is now the largest Chinese investment entity in Nigeria.

In 2006, CNOOC spent 2.3 billion dollars to acquire a 45% stake in the deepwater license of the Nigerian company OML 130, which is located in one of the most prolific oil and gas fields on the planet and contains the deposits of Akpo (discovered in 2000) and Aegina (discovered in 2003).

The Nigerian National Petroleum Corporation (NNPC) has made public its support for Chinese investment in Nigeria, despite the fact that the region has had considerable problems with the populations involved. These problems include sporadic outbreaks of violence: some young people have taken actions, including theft, as a way to demand access to the country’s oil wealth. There has also been a questionable lack of transparency by NNPC, which apparently has not been able to demonstrate its billion dollar revenues in recent years.

While trying to meet the growing domestic demand for fuel, Aliko Dangote (No. 1957) – the richest African and Nigerian business tycoon – is building what will be Africa’s largest oil refinery in the former capital Lagos. The nine billion dollar megaproject is supposed to be completed by the end of 2020, thus doubling Nigeria’s refining capacity and potentially turning the country into an exporter of refined products.

As China’s largest oil and gas producer in terms of efficiency and power developed, CNPC has recently signed a contract with the government of Benin (West Africa) to build and operate a crude oil pipeline in the region. It will extend for 1,980 kilometers from the Agadem oil field in Niger to the Seme Terminal port in Benin. It is the largest investment in a transnational pipeline that CNPC has ever made in Africa and aims at further allowing the transport of crude oil from Niger to international markets, as well as promoting social and economic development in Benin. Besides these large companies that invest heavily in the oil and gas industry, China is also contributing to the growth of African infrastructure as a way to have great economic and social impact. A noteworthy entrepreneur is Wilson Wu, an electrical engineer, who now manages the free trade zone of the Ogun State, Nigeria: a public-private project in which the local government provides the land and Chinese companies the capital. Wu is said to be one of about one million Chinese citizens who have ventured into Africa over the last twenty years to seek their fortune.

The daily need for black gold

It should be noted that the People’s Republic of China has increased its oil share by 20% so as to take advantage of low oil prices. Indeed, according to an announcement by the Chinese Ministry of Commerce, in a situation of declining demand and signs of increasing supply, the world’s largest oil buyer has increased the share for the use of crude oil abroad by non-State entities for 2021 by over 20% compared to 2020.

The increase in the import quota is equal to about 823,000 barrels per day, which is slightly lower than the amount pumped by Algeria that is an OPEC member. The companies that will use oil include privately-owned refineries, known as “teapots”, which in recent years have become increasingly important in the global oil market. These companies have been operating their facilities at a higher utilization rate than in 2019 for many months now, while their counterparts in the United States and Europe are lagging behind.

The increase shows that China’s oil purchases will be even larger at a time when global demand is facing new headwinds coming from further restrictions and blockages, while Covid-19 infections are spreading again in Europe and the United States.

Deteriorating demand prospects, together with a new supply in Libya, have weighed on reference prices, thus bringing West Texas Intermediate down to 6% on October 26, 2020. At 7:29 a.m. New York local time, the crude oil price was 2.4% lower, at $34.93 per barrel.

Behind the import push there is the ambitious expansion of China’s capacity. The country’s brand new mega-refinery, Zhejiang Petrochemical, started up one of its new 200,000 barrel/day crude oil distillation units on November 1. Another independent Chinese refinery, the Shenghong Petrochemical Group, is working on the construction of the country’s largest crude oil unit, which is expected to start up by the end of 2021.

Oil traders have been buying cargoes since the beginning of October 2020 and sending them to China, hoping to capitalize on an expected increase in demand at the end of the year when the independent refineries obtain the import licenses for 2021.

According to the Ministry statement, China has set the import quotas of crude oil for non-State companies at 243 million tons. According to the data collected by Bloomberg, this is equivalent to 4.9 million barrels per day. China has kept its annual quota unchanged at 202 million tons for this year, after an extraordinary increase of over one million oil barrels per day for 2019 compared to the previous year.