Commentary: Financial flows in search of secrecy or fleeing corporate taxation increase inequalities and vulnerability to crises and cause unquantifiable political damage. Meanwhile this capital shrouded by banking secrecy infiltrates Western political systems and destabilizes them as poverty and unemployment increase

Until the financial crisis of 2008, tax havens were seen as exotic places, Caribbean islands or Alpine financial fortresses patronized by celebrities, gangsters and wealthy aristocrats.

Since then six issues have become clear, which make us reflect:

a) the phenomenon is much bigger and more central to the global economy than anyone could imagine;

b) the laundering of money from global drug trafficking is favored – a business equal to the value of global oil trade, which rescued many of the big global banks from bankruptcy in the 2008 financial crisis;

c) the funding of terrorism is developed – a “low cost” war with a very high strategic effect;

d) it distorts the international financial mechanism by changing the data and costs of operations, thus making them unpredictable;

e) the amount of money available in tax havens makes mass corruption possible, which is now endemic in both developing and developed countries;

f) the biggest tax havens are not where we thought they were. 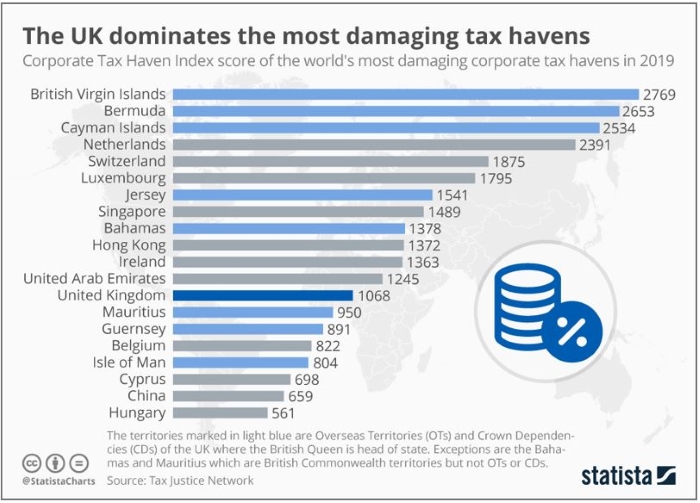 Companies are not the only beneficiaries. Individuals have hidden 8.7 trillion EU dollars in tax havens, according to 2017 estimates by Gabriel Zucman, an economist of Berkeley’s University of California. The more accurate and complete 2016 estimates by the economist, James S. Henry, point to a surprising total of up to 36 trillion US dollars.

Moreover, since the main users of tax havens are large financial institutions and other multinationals, the system damages small and medium-sized enterprises, by increasing monopolization.

Powerful governments, too, have an interest: most of the main tax havens are located in countries with advanced economies or in their territories. The Tax Justice Network’s Corporate Tax Haven Index ranks – among the top three – British Virgin Islands, Bermuda and the Cayman Islands, all UK overseas territories. The Financial Secrecy Index identifies Switzerland, the United States and the Cayman Islands as the top three jurisdictions for private wealth.

With a view to better understanding why rich jurisdictions are at the top of the list, let us try to think about how many very wealthy Africans hide secret assets in Geneva or London, as well as how many rich Swiss or British people would instead bring assets to some African capital cities. Offshore capital tends to flow from poor to rich countries, thus causing more damage than the populations that international mafia groups make converge in Europe.

The principles of the international system of corporate taxation were established by the League of Nations (1920-1946) almost a century ago. Therefore, until about ten years ago, there were few political curbs on the expansion of tax havens. After the aforementioned 2008 crisis, however, governments have been under pressure: 1) to bridge large budget deficits; 2) to appease voters who were furious about bank bailouts funded by taxpayers’ money and 3) about the increase in inequalities and in the ability of multinationals and the rich people to evade taxes.

The Panama Papers and the Luxembourg Leaks have shown the use of tax havens for often harmful purposes and have increased pressure to do something about it. The OECD has launched two major projects.

One is the Common Reporting Standard (CRS), a regime for the automatic exchange of financial information across borders to help tax authorities to track the taxpayers’ offshore assets.

The CRS, however, has many loopholes. For example, it enables people with the right passport to apply for residence in a tax haven rather than in the country where they live.

Nevertheless, the CRS has brought some results. In July 2019 the OECD estimated that 90 countries had shared information on 47 million accounts worth 4.9 trillion euros; bank deposits in tax havens had been reduced by 20-25% and voluntary disclosure prior to implementation had generated 95 billion euros in additional tax revenue for the OECD and G20 Member States, which include the major emerging market economies.

The other initiative is the Base Erosion and Profit Shifting (BEPS) project, targeted to multinationals. It is the OECD effort to “realign taxation with economic substance” without breaking the long-standing international consensus in support of the free competition principle. Although BEPS has improved transparency for multinationals, it has ultimately been seen as a failure by the OECD, especially for the digitalized economy.

In January 2019 the dam started to crack. The OECD recognized the need for “solutions going beyond the free competition principle”. In March 2019, Christine Lagarde, the then IMF Managing Director, defined the control method as “obsolete” and “particularly harmful to low-income countries”.

She called for a “fundamental rethinking”, shifting to approaches based on income allocation formulas. In May 2019, the OECD published a road map proposing reforms based on two pillars: (i) determining where taxes should be paid and on what basis, and what part of profits should be taxed on that basis; (ii) convincing multinationals to pay a minimum level of taxes.

Professor Reuven Avi-Yonah, of the University of Michigan’s Law Faculty, said that the plan was “extraordinarily radical” and would be “almost inconceivable” even five years ago.

But a radical change is feasible. The Tax Justice Network now sees that its four key demands – initially dismissed as utopian – are gaining global support: automatic exchange of financial information across borders; public records of the actual ownership of financial assets; country-by-country reporting, and a single tax with a distribution formula.

Corporate taxation, however, is only the beginning: we should consider the forces that make the offshore system work. Switzerland is a case in point. Politicians in Germany, in the United States and in other countries have clashed with Switzerland over banking secrecy, with little success. In 2008, after discovering that Swiss bankers had helped U.S. clients to evade taxes, the Department of Justice adopted a different strategy: it targeted not the country, but its bankers and banks.

For the first time Switzerland has made important concessions on banking secrecy. It is understood that any effective international response must include strong sanctions against those who facilitate private business, including accountants and lawyers, especially when they favor criminal activities such as tax evasion.

Financial flows in search of secrecy or fleeing corporate taxation increase inequalities and vulnerability to crises and cause unquantifiable political damage. Meanwhile this capital shrouded by banking secrecy infiltrates Western political systems and destabilizes them as poverty and unemployment increase. While financial capital flows from the poorest countries to the tax havens of the rich world, it follows the aforementioned migration of job seekers, not needed by the already saturated markets of destination.

The financial network of tax laundering operations favors the choice of unfair operations without any moral evaluation of the means to be used to enhance capital.

There will be those who cry out for freedom of trade, but suffice to point out to them the list of money laundering companies operating in tax havens.

The greater the scale of financial transactions, the less their freedom and autonomy must be. This will be the next big international issue to be solved with less talk and more deeds.

This website uses cookies to improve your experience while you navigate through the website. Out of these, the cookies that are categorized as necessary are stored on your browser as they are essential for the working of basic functionalities of the website. We also use third-party cookies that help us analyze and understand how you use this website. These cookies will be stored in your browser only with your consent. You also have the option to opt-out of these cookies. But opting out of some of these cookies may affect your browsing experience.
Necessary Always Enabled

Any cookies that may not be particularly necessary for the website to function and is used specifically to collect user personal data via analytics, ads, other embedded contents are termed as non-necessary cookies. It is mandatory to procure user consent prior to running these cookies on your website.